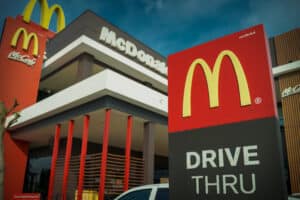 Government plans to restrict junk food advertising on television and online have been criticised by campaigners who say they contain too many exemptions to affect rising levels of obesity in the UK.

The new rules, which were announced on Thursday and come into force from the end of next year, will ban adverts for products deemed to be high in fat, salt and sugar (HFSS) before the 9pm watershed. Paid-for ads on sites including Facebook and Google by big brands will also be banned.

However, the government has allowed numerous exceptions and carve-outs. Companies will be able to show marketing on their own websites and social media accounts. The restrictions will not apply to marketing by smaller companies of fewer than 250 employees.

Some foods that are HFSS that are not viewed as traditional “junk food” – such as honey, Marmite and avocados – will still be allowed to feature in advertising. So too will zero-sugar drinks and products such as McDonald’s nuggets, which nutritionally are not deemed to be an HFSS product.

Controversially, brand-only advertising online and on TV will continue to be allowed, so companies associated with junk food products can market themselves as long as those products that fall foul of the rules do not appear.

Health campaigners welcomed the further tightening of ad rules, but voiced concerns that big brands associated with poor dietary choices will still be allowed to have a large presence in front of consumers.

“The proposals represent a significant step forward in reducing exposure to a constant stream of unhealthy food and drink advertising on TV and online,” said Barbara Crowther, coordinator of the Children’s Food Campaign. “We remain concerned that the proposals will still allow massive multinational junk food companies and delivery platforms to run big brand campaigns.”

The exemption for small companies means that Facebook and Google, where small companies that cannot afford TV ads tend to invest their marketing spend, will continue to feature significant amounts of junk food adverts.

The government says the TV and online restrictions could remove up to 7.2bn calories from children’s diets in the UK, reducing the number of obese children by 20,000. Currently, one in three children leave primary school overweight or obese.

“We are committed to improving the health of our children and tackling obesity,” said the public health minister, Jo Churchill.

“The content youngsters see can have an impact on the choices they make and the habits they form. With children spending more time online, it is vital we act to protect them from unhealthy advertising.”

However, the advertising industry said the government’s own impact assessment shows that a pre-9pm TV ad ban will only remove about 1.7 calories a day from a child’s diet, the equivalent of half a Smartie.

“Advertisers agree that Britain has an obesity problem and that action must be taken,” said Phil Smith, the director general of ISBA, the body that represents UK advertisers. “[But] there is no evidence that what ministers are proposing will have any meaningful impact on children’’s health. It seems that government has plumped for headlines over meaningful reform.”

The News Media Association, which represents all the big national and local newspaper publishers, said the “draconian” measures will “harm news media publishers who rely on advertising revenue to fund journalism which keeps us all informed”.

It is estimated that more than £400m is spent on advertising food products online in the UK annually. A pre-watershed TV ad ban could cost broadcasters such as ITV, Channel 4, Channel 5 and Sky more than £200m a year in revenue.

The tough new rules follow Boris Johnson’s hospitalisation because of coronavirus last April. The prime minister is said to blame his own weight issues for contributing to his illness; obesity has been identified as an important factor in determining which people are seriously affected by coronavirus.

Deliveroo riders are not employees, Court of Appeal rules

Over 5m people in UK had parcels lost...

7 Tips To Get Your Guest Posts Published

Enter Your Information Below To Receive Free Trading Ideas, Latest News, And Articles.
Your information is secure and your privacy is protected. By opting in you agree to receive emails from us. Remember that you can opt-out any time, we hate spam too!